I went back to Shames parking lot after I had dropped my brother off at the airport and had done my laundry in Terrace. It was already getting dark, nobody else was around and it was cold – a perfect setup for some self-pity. At least it was snowing.

The next morning, the sun woke me up. The surrounding mountains werd so beautiful, I could not stop taking pictures for a while after breakfast. Eventually, I put my ski gear on and started yet another – athough solitary – day of skiing on the empty hill.

When I got up to the top of the T-bar, i found two kickers somebody must have put in on the one day we had ‘t skied. And there were two guys getting ready to hit them. Will and Ben had about as little routine in doing this as I. We just got better with every try.

Will and his girlfriend ended up hosting me for a few days in Terrace. They are extraordinary young people: At 25, they bought a sailing boat and cruised the Bahamas for five months. Right now, they are getting ready for another five months on the Pacific Crest Trail by dehydrating tons of food everyday… Since it was Will’s birthday, I got them an Italian espresso maker to take along the road. It took Will only an afternoon to fall prey to Italy’s most common vice. 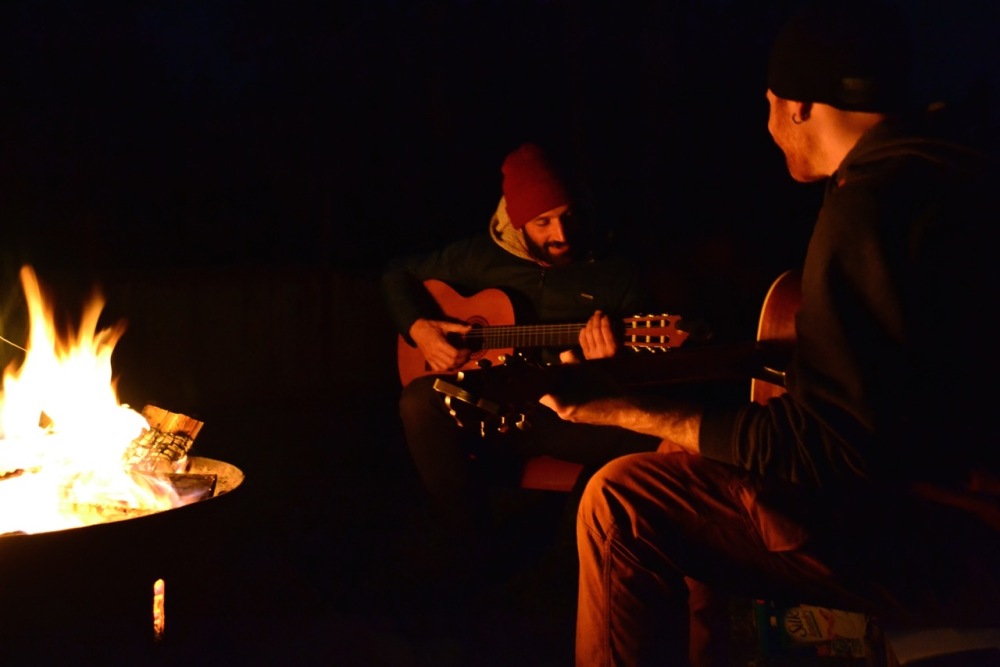 Will pushing my guitar skills (and probably his patience) to the limit.

My last day in Shames was spectacular. Total bluebird.

Richard and Dan took me along to ride the northside of the Zymacord ridge. The two seniors knew all the stories behind those funny names of the runs in Shames. That’s what you get from 25 years of riding a mountain! 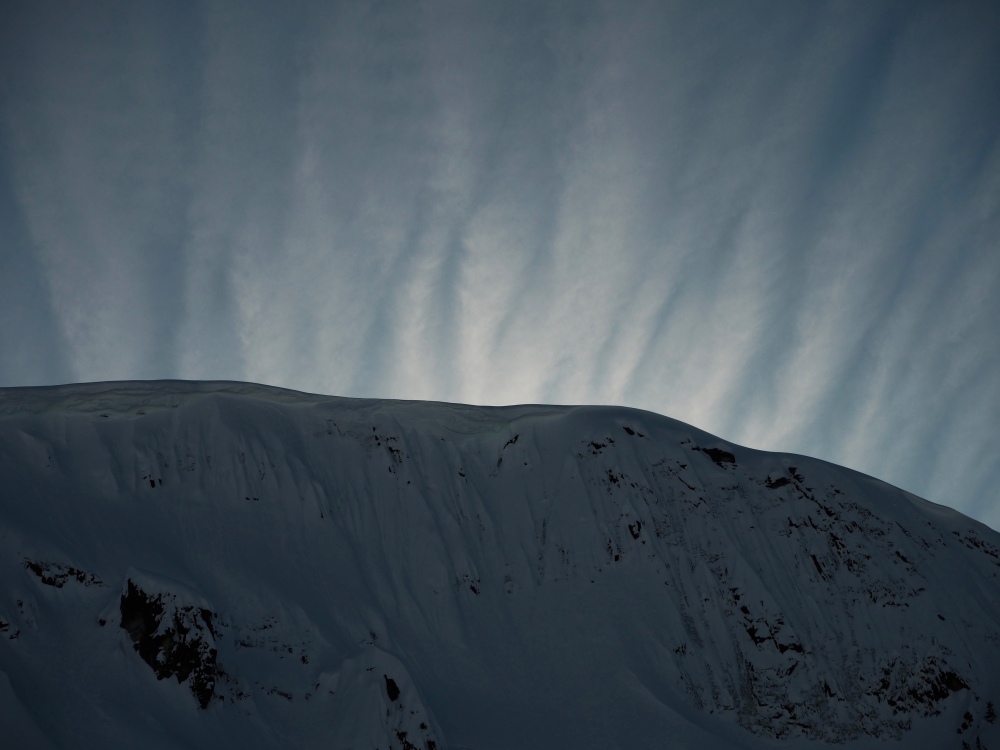 I am grateful every day that I am given the gift of my eyes and the privilege to see such things of impeccable beauty.

I couldn’t stop until after the sun was down.

I left Shames too early, as I soon would find out. 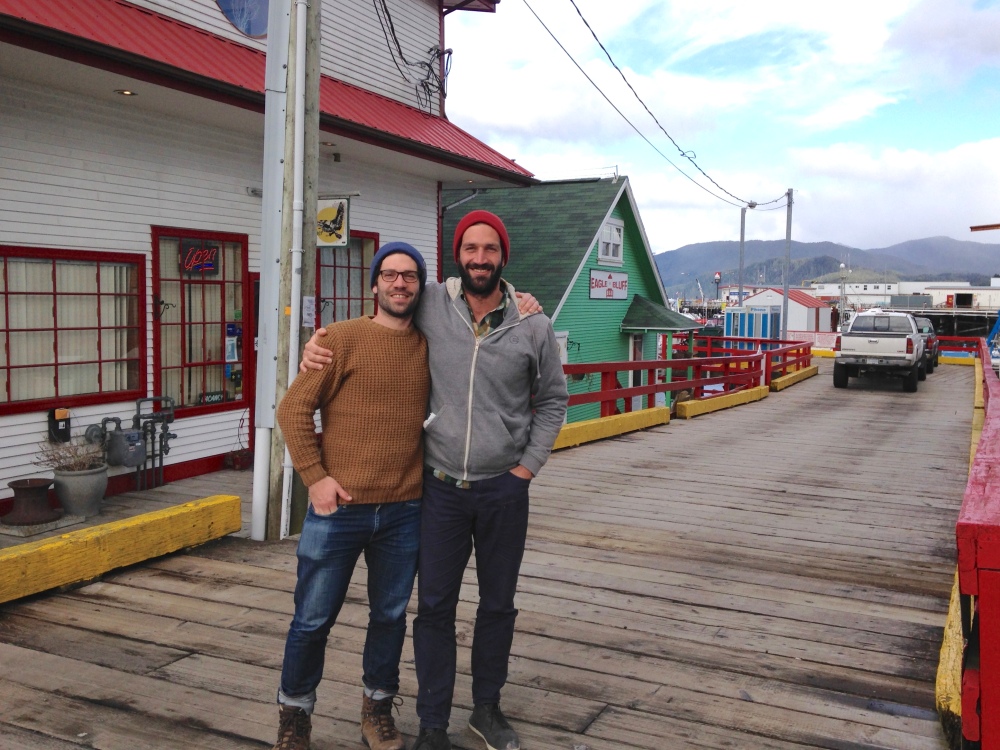 Posing in Prince Rupert on the day of Patrick’s departure.

What could be better than having the time of your life and sharing it with your brother? Luckily, Patrick had already decided to come over from Switzerland before it started snowing in Europe… and so we spent the longest time together since I had left my parent’s house. Not only do we get along really well, we’re also perfect ski buddies: Patrick’s slightly stronger in the downhill (I hate to admit), so I am always a bit pushed to go harder, and he proved to be still strong enough to hang with me uphill despite my huge exercise advantage this year.

… and hucking trees in the “Dagobah system”. 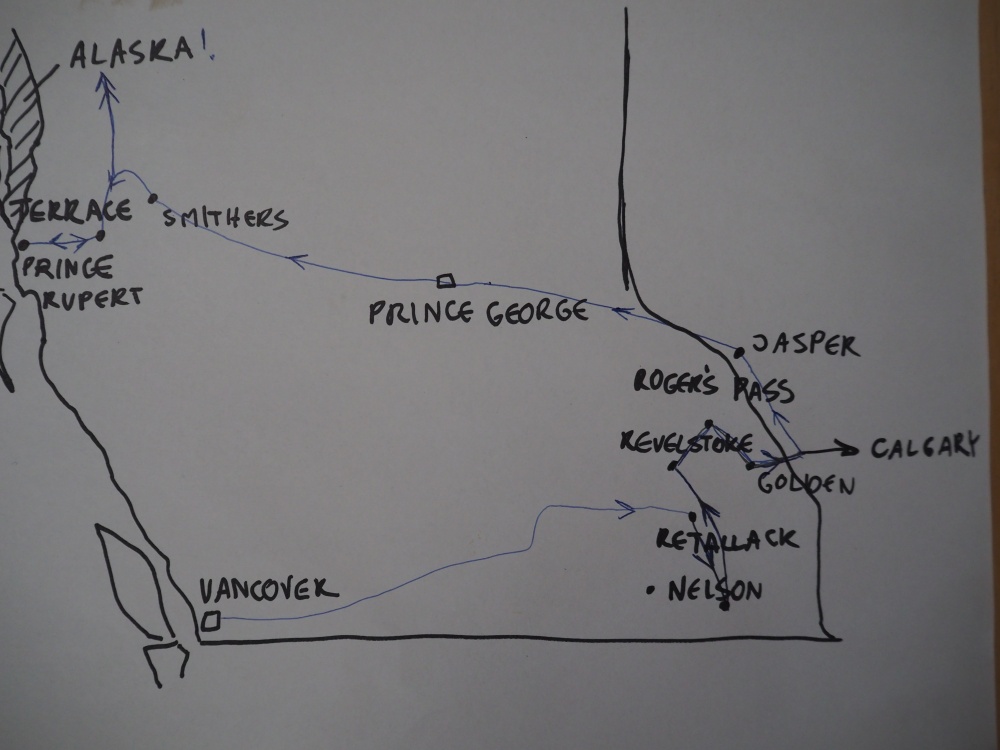 After a week on Roger’s Pass we had six days of ski touring in our legs and it got warm. So we decided to hit the road to the northwest via the famous Icefield Parkway highway and Prince George, where we stayed at our childhood neighbour Klaus’ and his wife Sabrina’s . 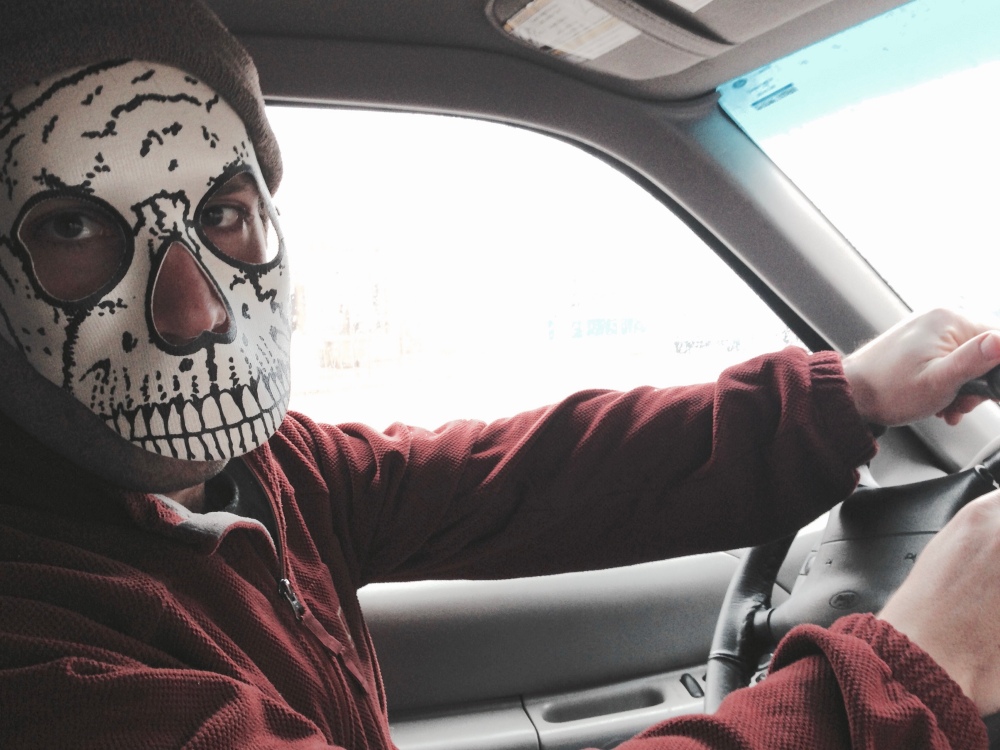 All this driving really wears you out.

When we got to Smithers, half way up between Vancouver and the northern boundary of BC, on the continental side of the coastal range, there was no sign of the praise it had received in my guide book. Dry, dusty and windy.

This poor moose, the first one we ever saw, just seems to embody our Smithers experience…

We did what we would have done in Europe if conditions were bad: Get the summit! Mount Hankin near Smithers was the only one we cared to get in twelve days of skiing.

Patrick proved to be a worthy gipsy in many ways:

1. When in trouble, double. Slept in the car four times in a row at the Shames Mountain parking lot together with a giant like me in a space as small as 120 x 200 x 60 cm…

2. Cooked an elaborate pasta dish („al gorgonzola“) with the camping stove at the motel…

3. Lived off water straight from the stream or melted snow for almost a week… 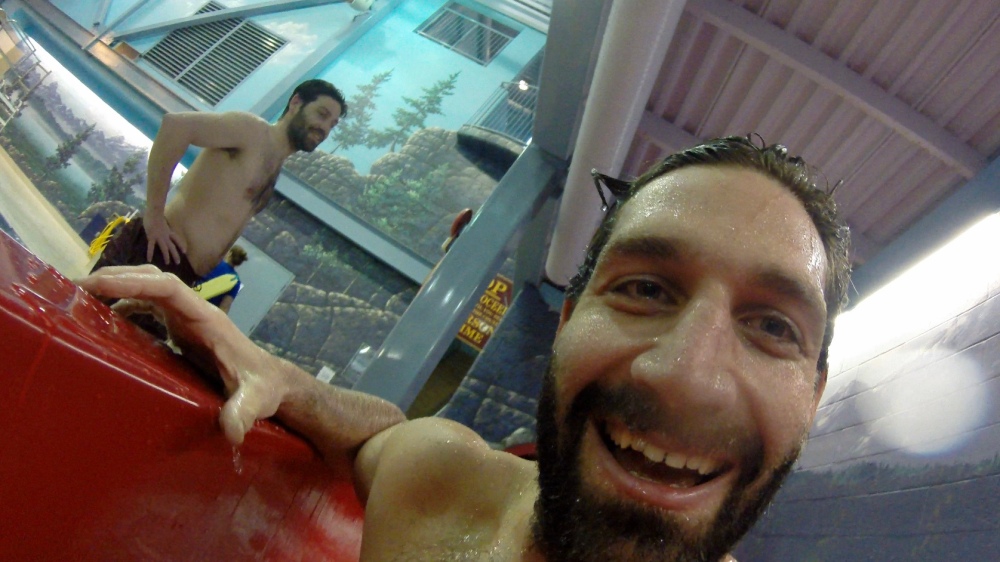 4. Went to public swimming pools to get a chance to wash every now and then, even scored a free swim night in Terrace!

5. Not explicitly a gipsy virtue, but nevertheless noteworthy, he endured two bursts of six back to back days of ski touring, for a total of around 15,000m in vertical.

Chapter 3: And then there was Shames 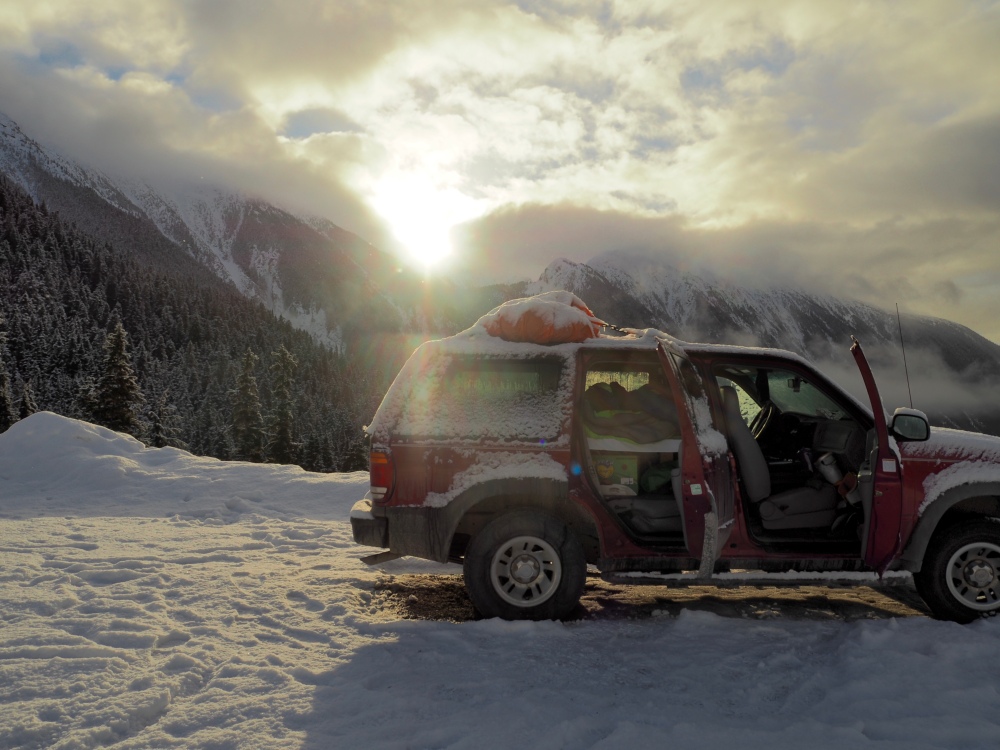 Jesus loved us and let us know about it.

We arrived in Shames all depressed after an evening drive from Smithers through the brown Skeena valley. But when we got up in the morning on the parking lot of Shames Mountain Co-op, everything fell in place within seconds: there were 10cm of fresh and the sun was just cracking through. The chair was not operating and we kept being greeted by backcountry skiers who were either locals or also camped on the parking lot. 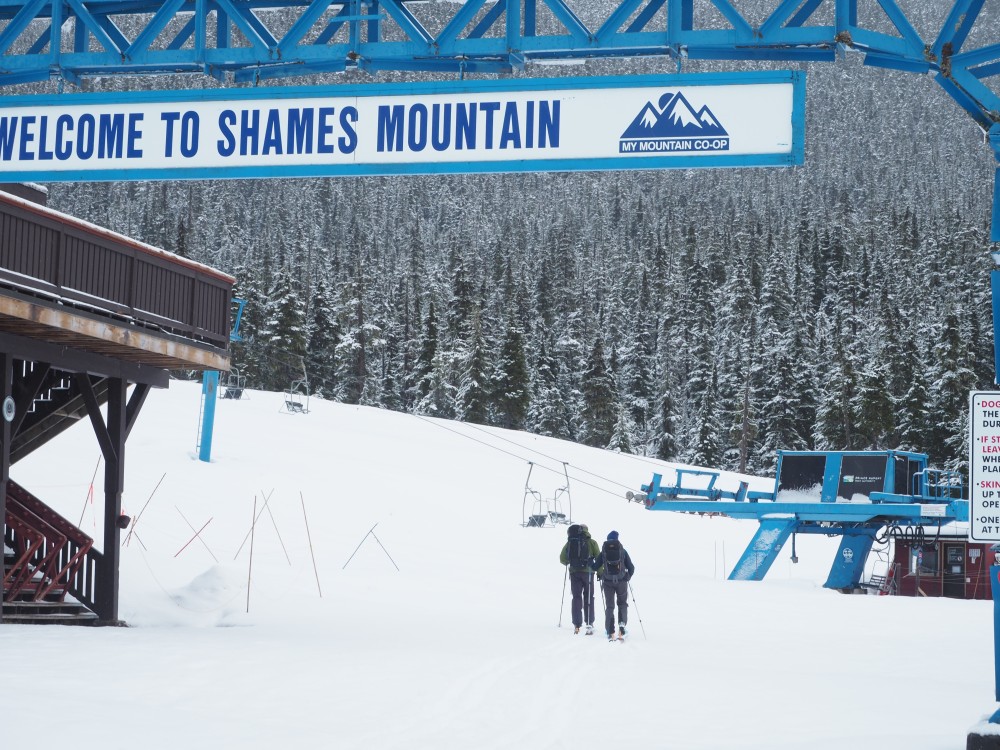 Shames felt hippie from day one and soon become an enchanting love affair.

Meeting the neighbours in the parking lot…

…and on top of the hill.

Rippin until the break of dawn! Here on “No dogs!” 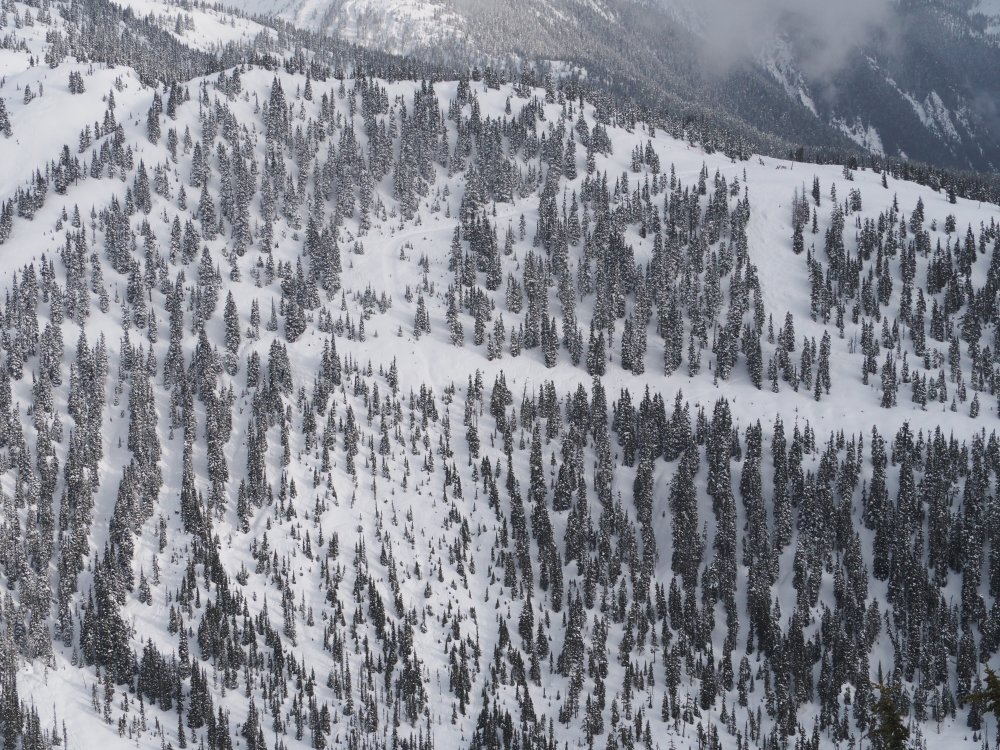 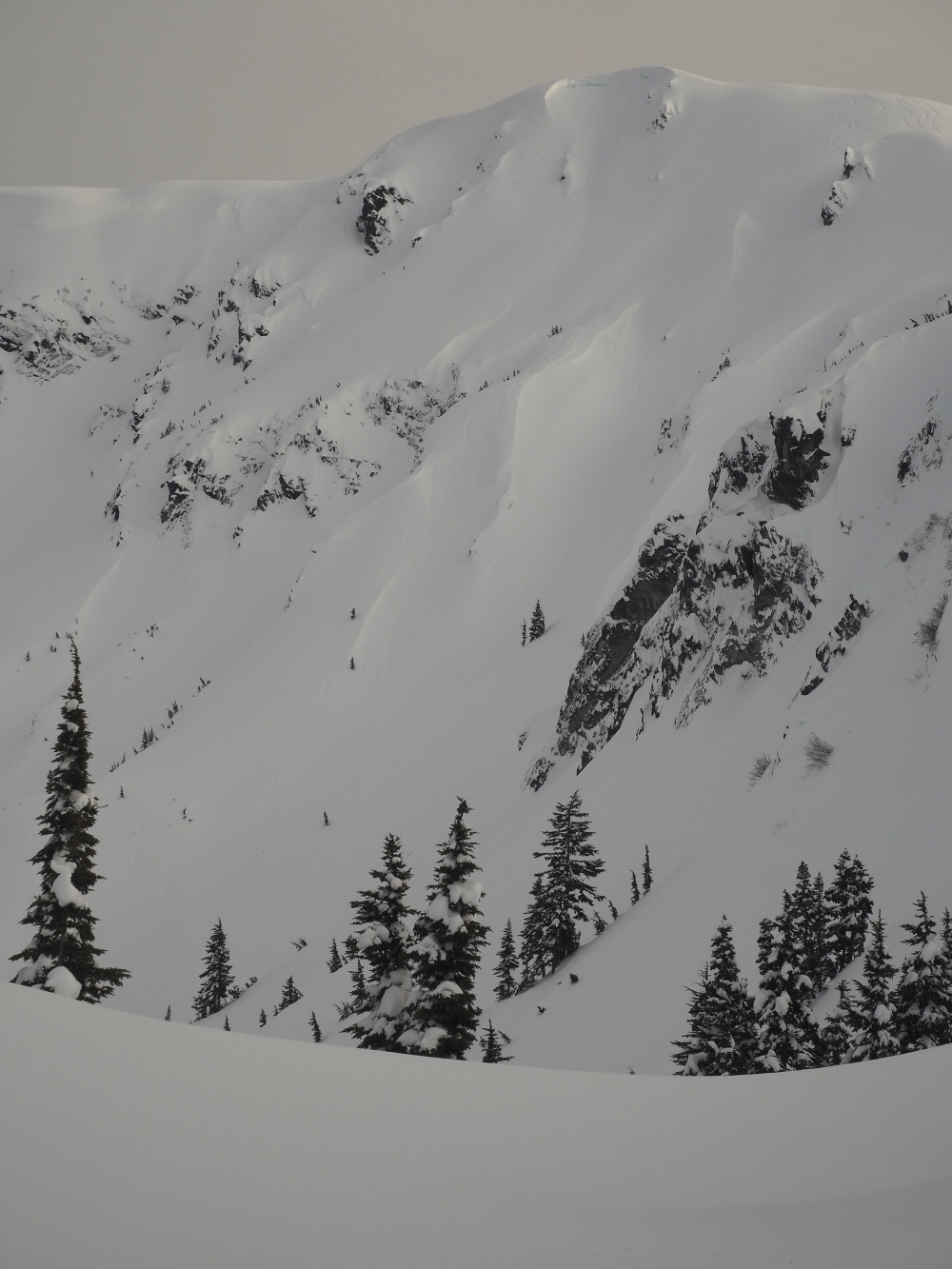 One of our more rad lines to Hidden Lake.

Shames in all its beauty.

I was very sad to see my brother go home. But I had no clue yet what Shames and Terrace had in store to comfort me the next day…

Other intruders must have had fun with the stuffed grizzly bear long before we came.

It was one of those ideas that are born around a campfire when a bottle of firewater or to two make the rounds. We all camped at the Roger Park Discovery Center parking lot, in our cars. Right next to it, the abandoned Glacier Park Lodge. Someone mentions he heard beds are still perfectly made with linen and all. Someone else overhears the chat and adds that he has seen a possible entrance to the building via a broken glass door… 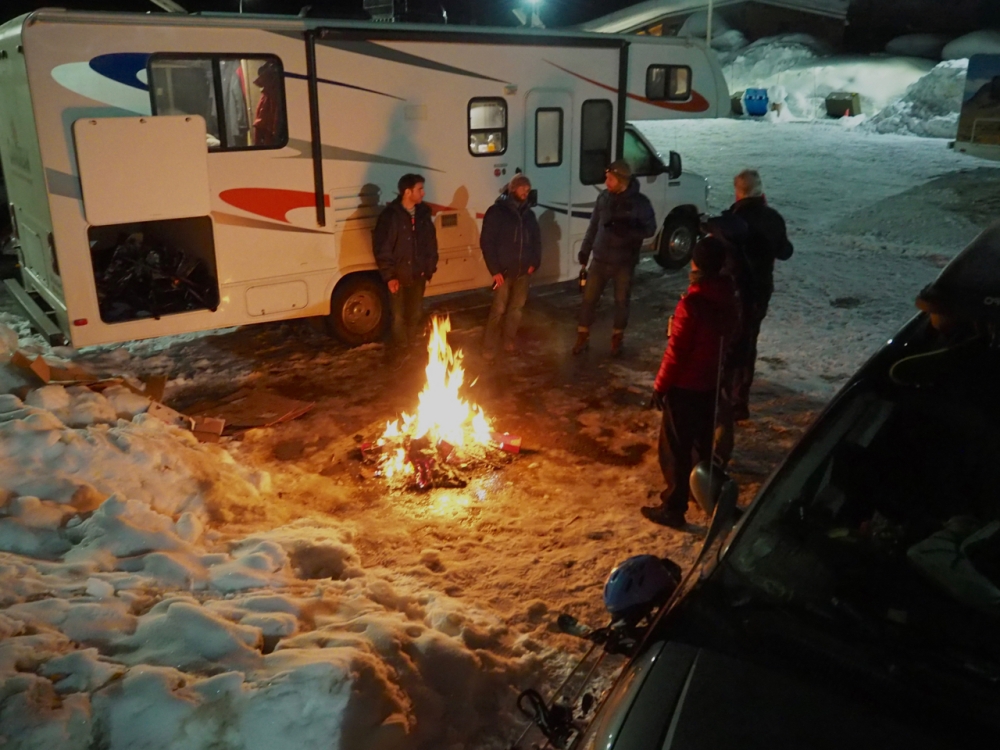 It didn’t take curiosity very long to win us over and we explored the old Glacier Park Lodge with our headlights. A super-weird experience, slightly creepy but yet quite entertaining. Especially when the alternative is going to bed in your car at 7.30 pm.

We could still hear the screams of the restless souls of thousands of bagels. 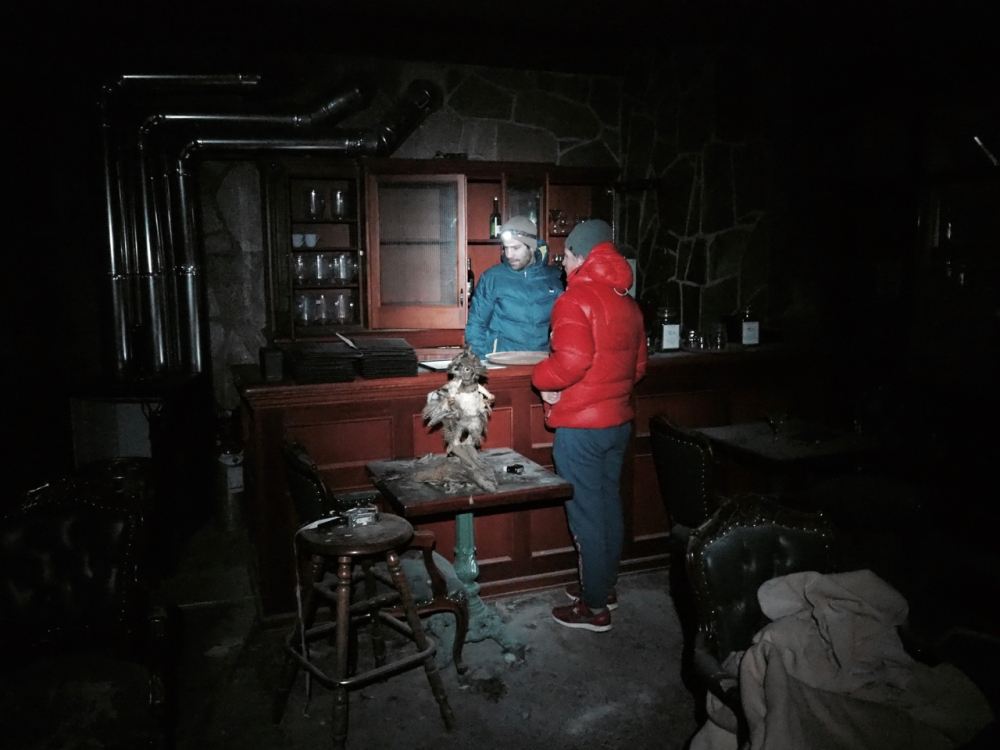 Patrick and Jonas drank every drop of aged booze they could find. 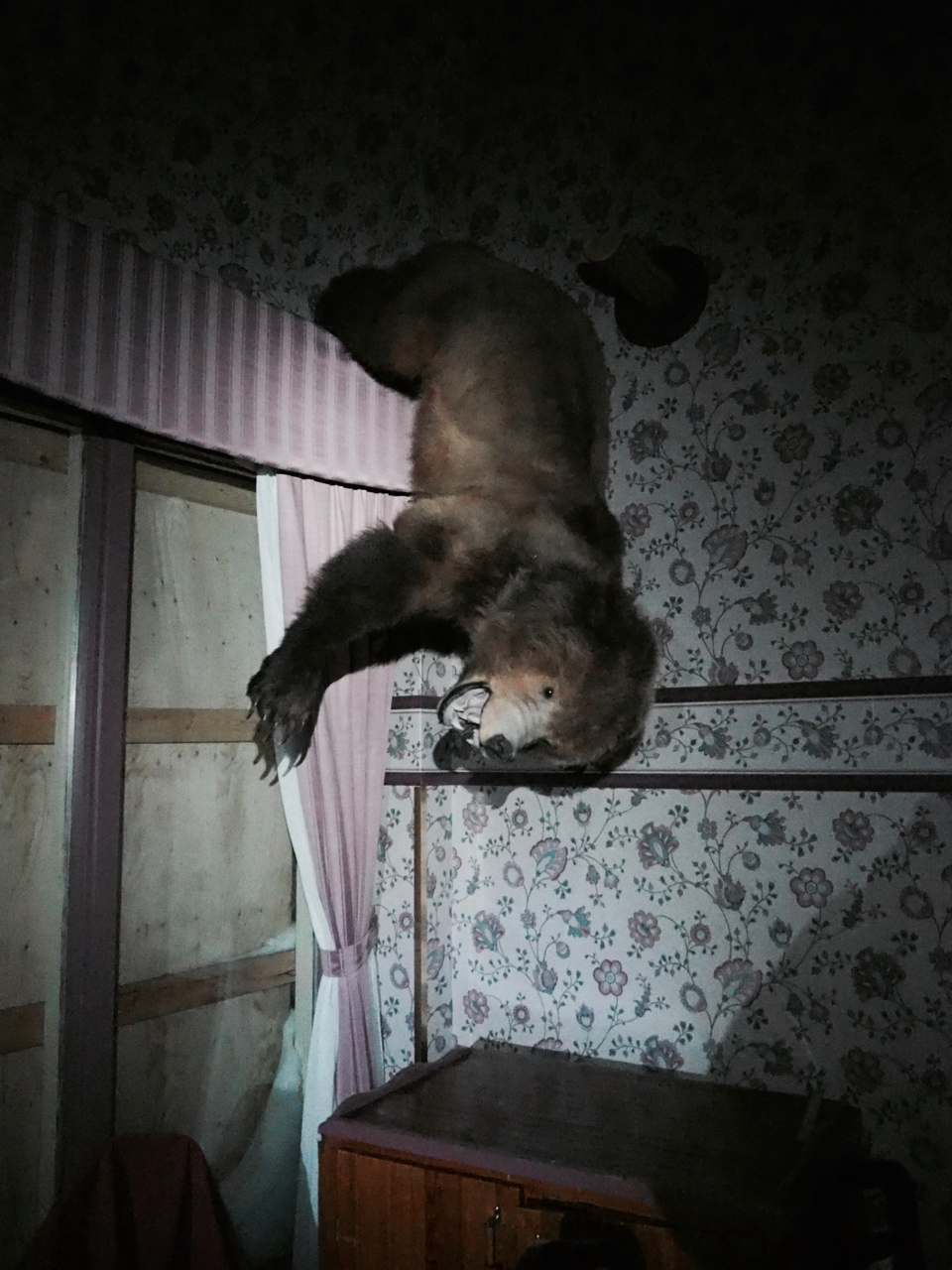 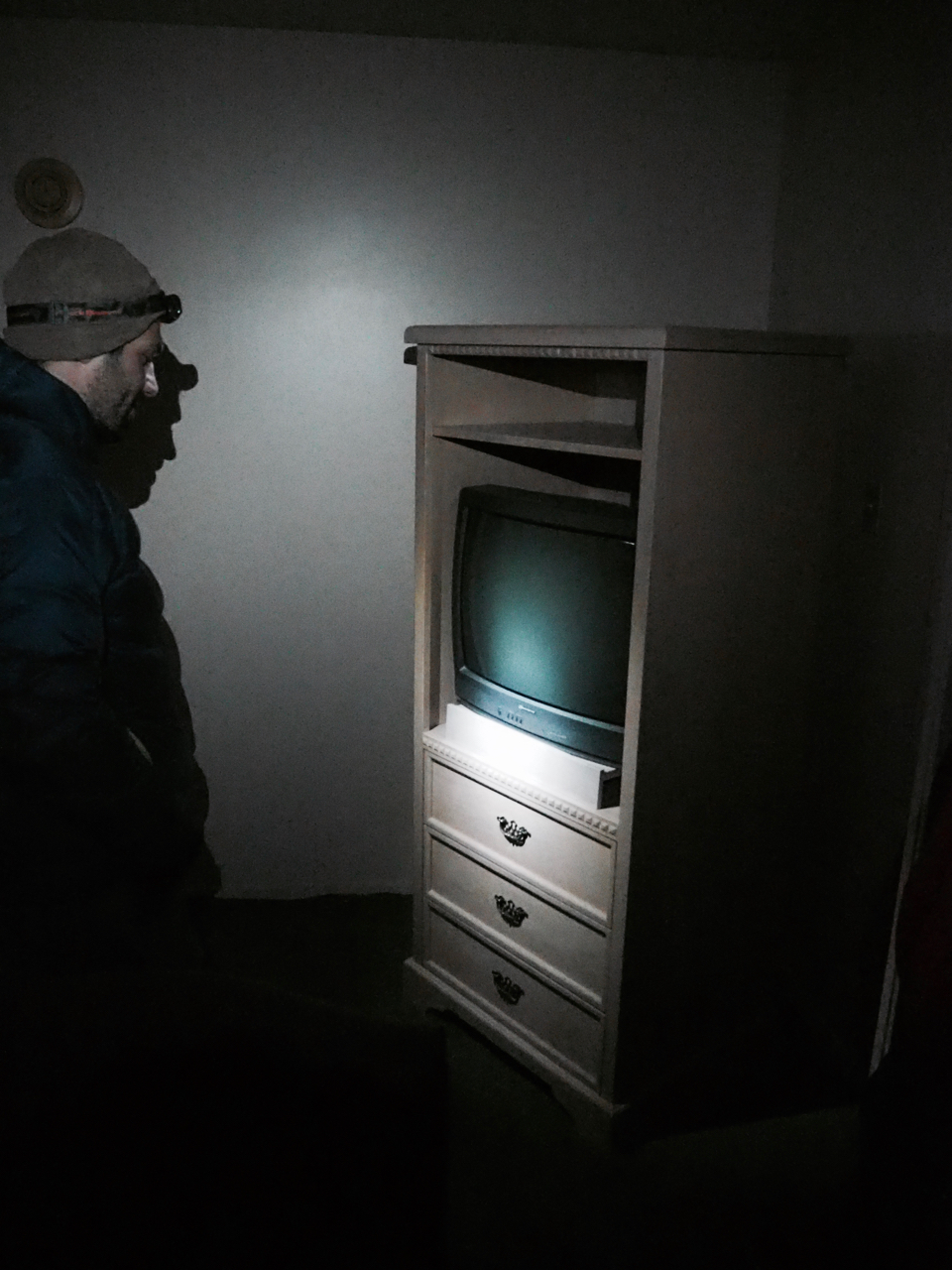 Even on hols, my brother just can’t do without watching TV.

Guest of the lodge used to to be so terrified by the creepy noises they would stand up straight in their beds. 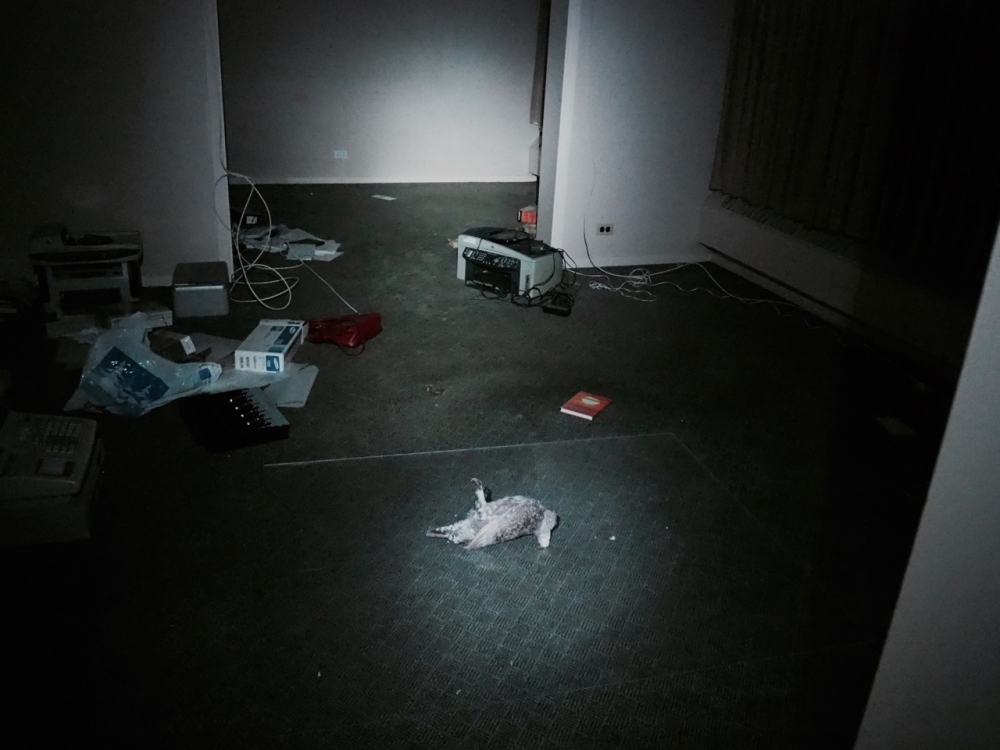 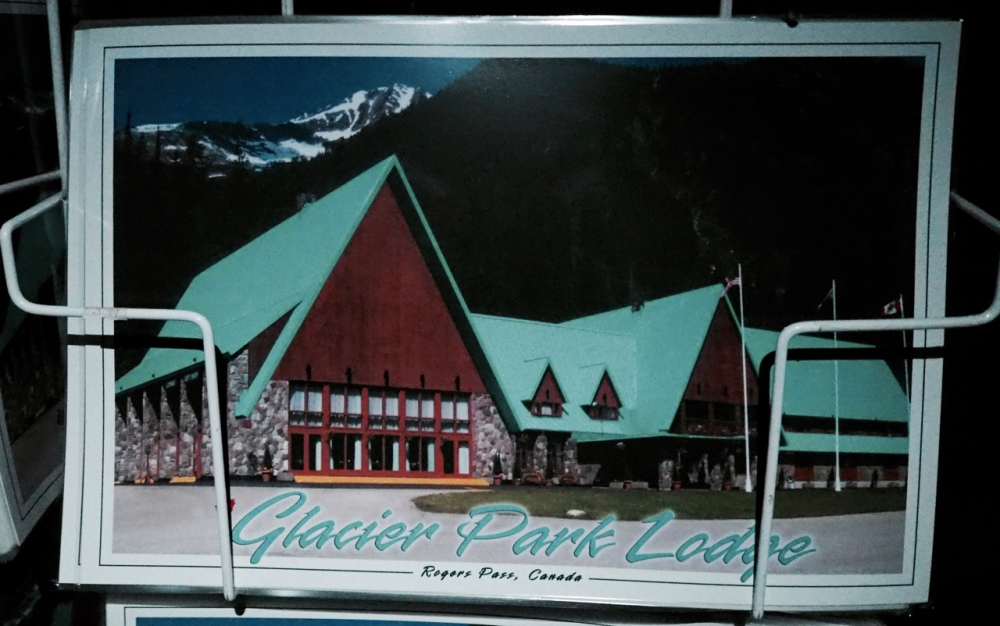 Another story to tell at the campfire under our belts.

Imagine you go to London and you find yourself all alone on Trafalgar Square, in the middle of the day. Something similar happened to me when I stopped in Lake Louise to have a glance at the famous Moraine Lake: I had the luxury of having it absolutely for myself!

OK, maybe it was because the summer road was closed… and it was a 12km cross-country hike to get in. I even had to set in the tracks on the last 3km. 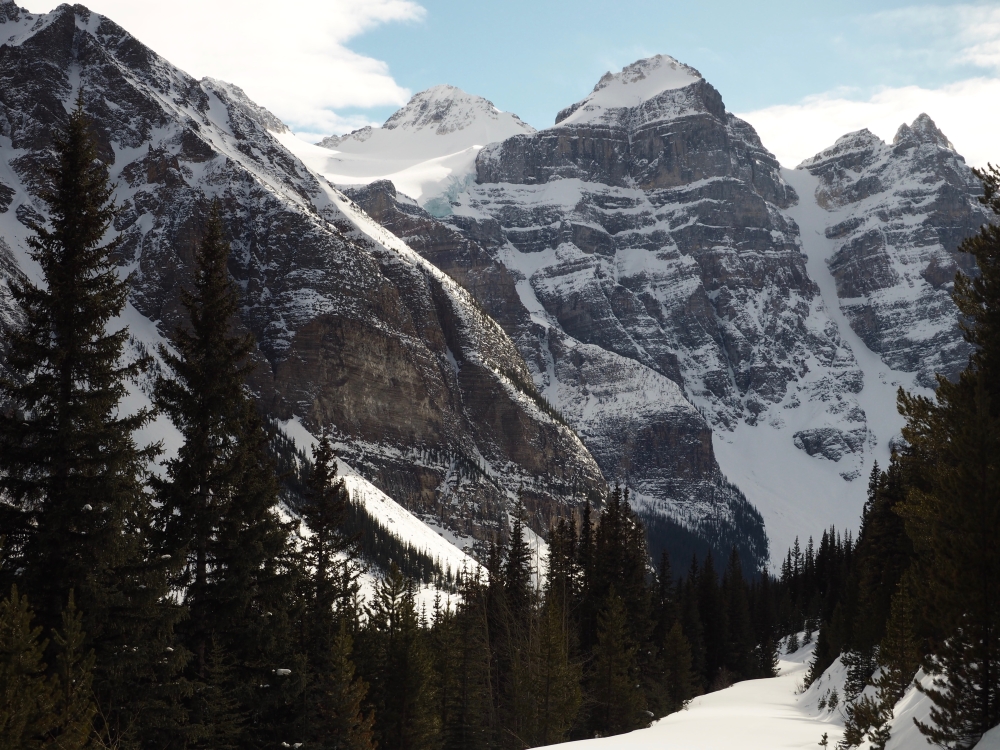 Gorgeous and lonely. I had to set in the tracks.

I dared not to obey.

First things first: Some restocking is needed after a 12km cross-country hike to Moraine Lake. 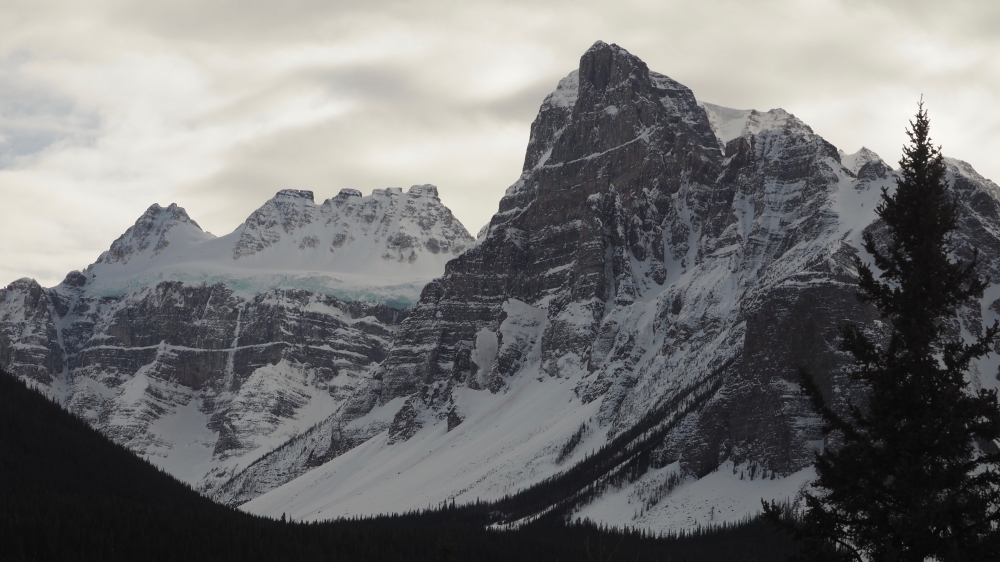