The skin around my fingertips has become hard. When I put them together and press them slightly, the touch and feel reminds me of a football not properly inflated. On some fingers, the tips are still a bit numb, which exacerbates the impression. The skin is peeling off from all of them. The veins in my underarms are bigger and more distinctively visible than ever before. When I walk, my calve muscles feel sore. This is what happens after a month of climbing. Today is my sixth or seventh rest day. My body may be exhausted, but my mind is so even more.

Arrival in Kalymnos by boat on May 5.

I am not a natural rock climber. Since I was twelve years old and started growing like a mushroom, I have developed a more or less mild form of fear of heights. Nevertheless, rock climbing has been fascinating me for about a decade, although mostly from afar. It always used to scare me, so I never really got into it. I just top-roped for a few months in the gym about ten years ago. Then, about two years ago, I started doing some vie ferrate occasionally. Thereafter, I paid maybe twenty-five visits to the boulder gym in Frankfurt and took a two-day course in multi-pitch climbing about a year ago. Through these activities, I found out that I could overcome my fear of heights. Psychologists call this de-sensibilisation, a mountain guide simply commented: You don’t really suffer fear of heights. I had never reached clarity on this. I still remember turning around at the beginning of quite a few vie ferrate. By beginning I mean: 2.5 to 4m off the ground! Yet I made all of them in a second attempt and halfway through I usually had lost my fear. 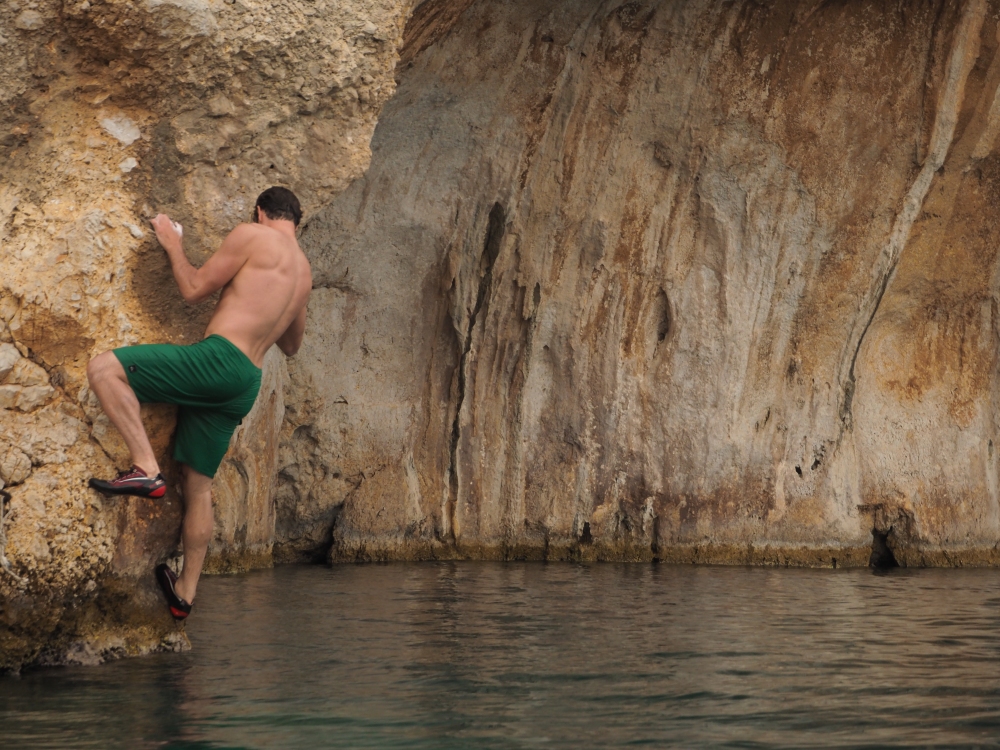 On a deep water solo attempt near Vathy, Kalymnos.

Therefore it somehow seemed logical to dedicate some time to the obvious challenge of rock-climbing. And as my life currently comes without responsibilities and duties, I flew from Vancouver, Canada to Kalymnos, Greece to explore climbing, and my reaction to daily climbing. All I had done before coming to Kalymnos was top-roping, mostly more than ten years ago and indoors. Now I had to lead-climb on rock, belayed by a total novice.

Moment of truth. Lead climbing was a totally new experience for me.

I go through a lot of fears as I start climbing, every day. The most natural one is the one of falling, from which I believe the fear of heights derives. Fear of falling manifests itself in a serious of doubts in the setup that allows you to climb safely in heights that would make any fall your certain death: the belayer, the rope, the quickdraws, the anchor, the bolts, the knot that connects the rope to my harness and the harness itself. And especially if you are the lead climber, doubts in your holds as well as your hands and your feet placed on them. Ultimately, they are doubts in yourself and your ability.

Since May 6, I almost went through a full circle. When I came here with Denia, we looked for grade four routes. On our very first day, I climbed a 5b+ or something like that as well. Initially, my fear was mostly directed towards the equipment: Was the rope still good enough? (Yes, absolutely. It was barely used.) Would the quickdraws and the bolts be strong enough? The belay device? The harness? In hindsight, all these elements are in the very rarest cases the reason for sport climbing accidents.

The Dharma bums chilling between climbs. Leading on a rock climb is predominantly mentally exhausting at my level.

As we moved on, I became more aware of the risks inherent to having a lighter belayer secured to the ground by a sling. Some practice falls gave me back the necessary confidence in our setup. Denia left, and I started to have varying belayers, of different abilities (always above mine) and weights (always below mine). Joe Vallone, a US mountain guide from La Grave, was a lot lighter than me, yet he pushed me to my very best route in terms of grades: A probably quite overrated 6a+ of 30m which I managed to ‚flash‘. (‚Flashing‘ means finishing a route in your first attempt ever without resting in the rope or falling, whereas ‚onsighting‘ means that you flash a route that you have never seen anybody climb on before and haven’t received any detailed information about either. All further attempts are referred to as „projecting“, until you finally make your way through the route without falling or resting in the rope, which will then count as a „redpoint“.) 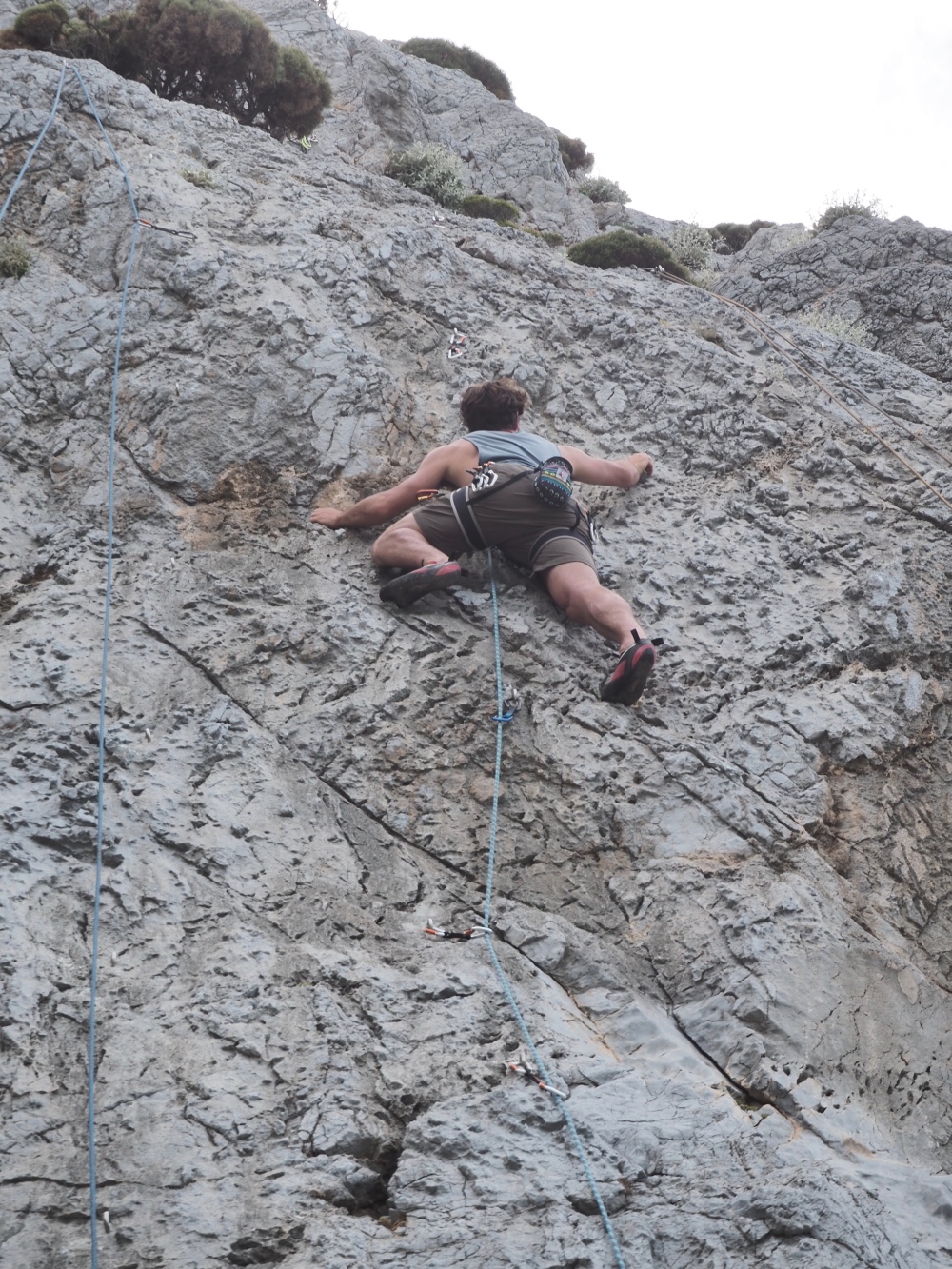 I hoped copying Reinhold Messner’s hairstyle would make me a better climber, and I was surprised to find out it didn’t.

After Joe I climbed with a Candian couple much better than me and forced myself onto some guys from Texas as well. I found this slutting for  climbing partners quite exhausting and was not willing to do it another day, when I ran into Antoine, a buddy from my days with the Frankfurt Ski Club at the local bakery shop. He introduced me to his climbing group with their instructor Lukas and I was sorted for another week. After the group left I had the privilege to climb with Lucas every day, which certainly helped my technique a lot. Until one bright morning on a 6a+ slab route, I took my first involuntary fall as a lead climber.

Belaying Lukas on ‘Lolita’ (7a) in the world-famous Sicati cave. 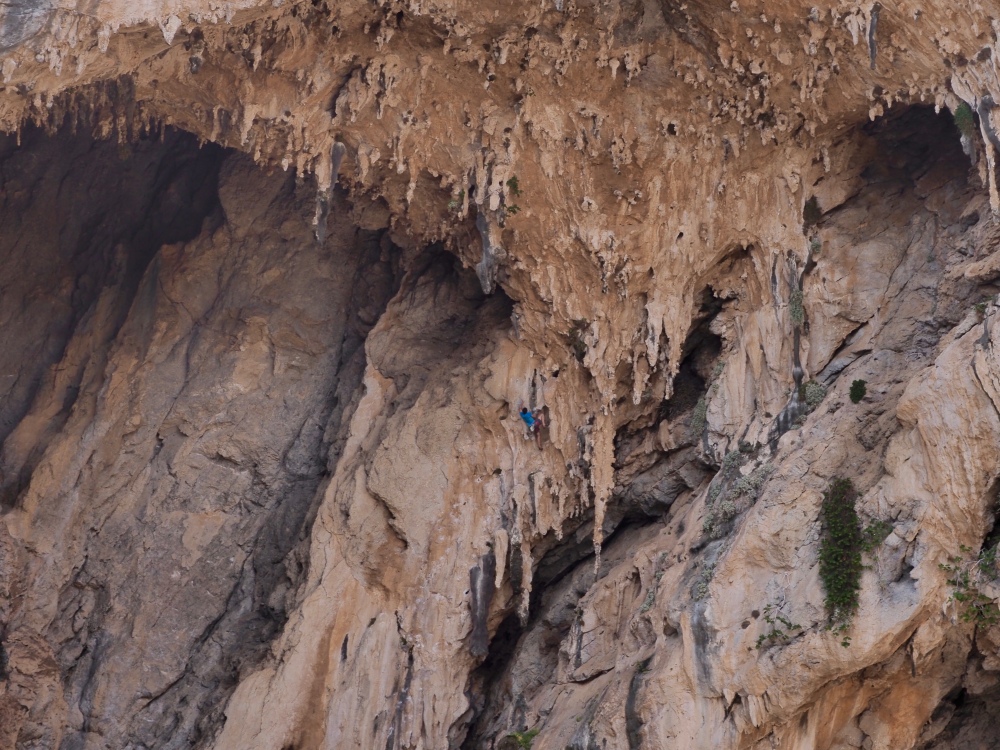 That changed my young climbing. The fall went well, although I did it wrong and landed on the wall sideways. But it triggered something in my mind. All of a sudden, I was scared. The next day, I had to force myself incredibly to lead a 5c, and for the first time I experienced the wish to quit at every single bolt that I clipped. Unfortunately, things stayed like this. Meanwhile Lukas left and after a couple of rest days, I started climbing with Englishman, yacht owner, sailor and oil & gas contractor Chris. On every route I was struggling, even on something as easy as 5a once. Most of the times, I forced myself not to give up. I still climbed a few 5c and 5c+ routes, but in no style: Crawling from bolt to bolt, resting in the rope for a long time at the cruxy sections. And considering to shout down to Chris to lower me at every single bolt.

The classic ‘Guillot Corner’ (5c+), one of the first routes where I discovered the consequences of the loss of my virginity in falling as a leader.

After three or four days of climbing like this, I was ready to accept the fact that climbing was simply not for me. Then,  one evening I happened to hang out with some very dedicated and experienced climbers. They were both Greeks and foreigners who had either permanently or temporarily moved to Kalymnos or had re-arranged their lives to be able to climb more in some other meaningful way. By power of their authority, they made me understand that every climber goes through such periods. So I kept climbing on, although under disproportionate mental stress. One day on Chris’ boat, I discovered a book in the shelf called ‚The Rock Warrior’s Way – Mental Training for Climbers‘‚ by Arno Ilgner. The book is a revelation. Never before have I read such a good analysis of the mental processes we all know from situations outside of our comfort zone and the methods we might have applied unconsciously to succeed or the mistakes we might have made that kept us from succeeding. Now I had a toolkit to use during the dozens of moments in which I wanted to quit and get lowered down on every climb.

With Chris’ help, I devised a strategy to narrow the gap between what I could physically climb and what I could mentally climb as the leader: I would second and top-rope on hard routes (6a to 6b) and take a few falls everyday while doing this. Then, I would lead some easier routes afterwards (5b to 5c+). I think this strategy is working… Yet, some days ago I seconded a route I had led two weeks ago. After double-checking in my notes, I was impressed with myself that I really had managed and dared to do that. On the other hand, this tells me with little room for misunderstanding, that I have not fully recovered my former capability yet.

It is getting hotter every day here in Kalymnos. While the evenings become more and more enjoyable, climbers need to get up at 6am to make it a worthwhile day. Soon it will be too hot, and I will probably have to leave without having achieved my stated goal of leading a 6b route. Not that it would matter: Pre-defined categories of success and failure only hamper the ‘Rock Warrior’s’ learning experience according to Ilgner. 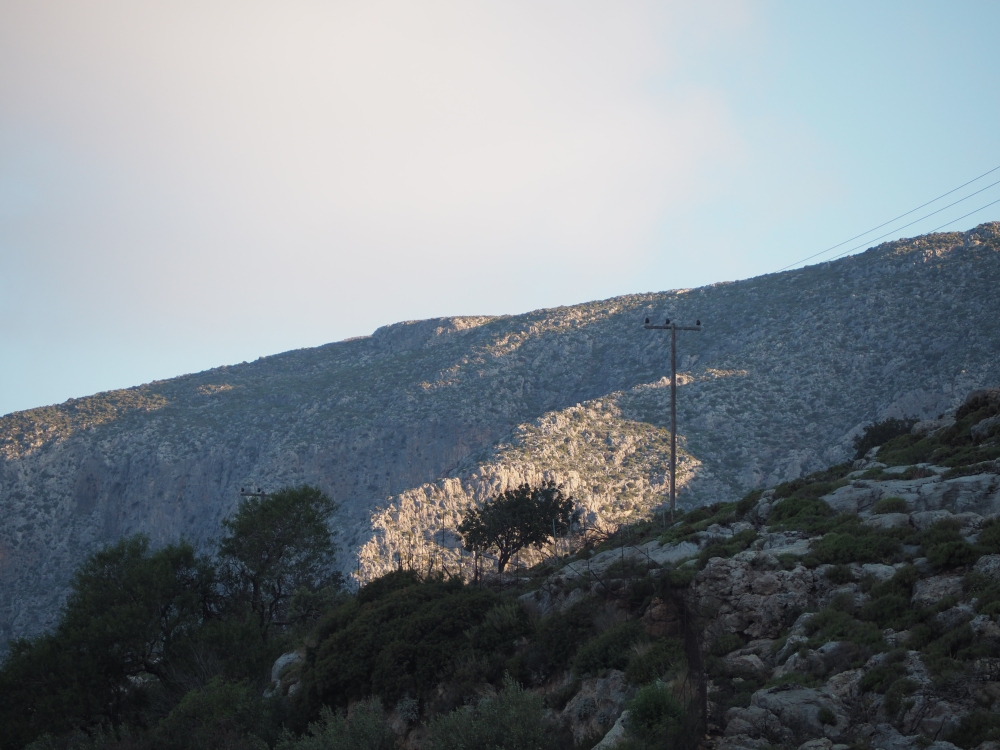 Early starts are essential as it gets hotter. 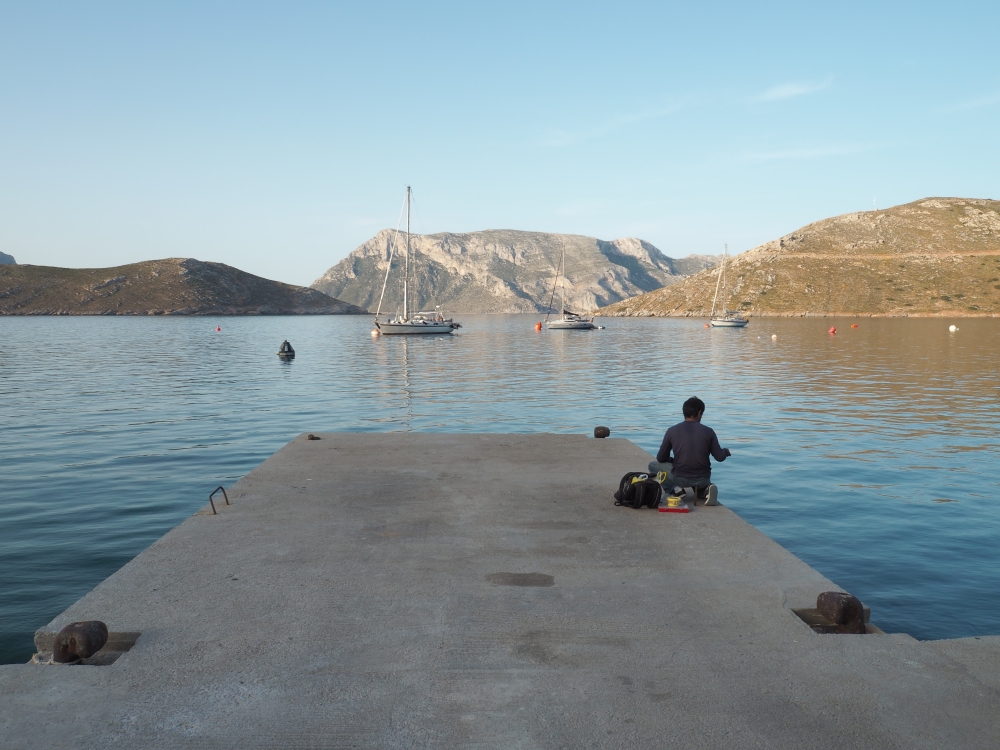 Picking up the Englishman in the morning. He’s late, as usual…

The Frankfurt crew in ‘Kastri’. 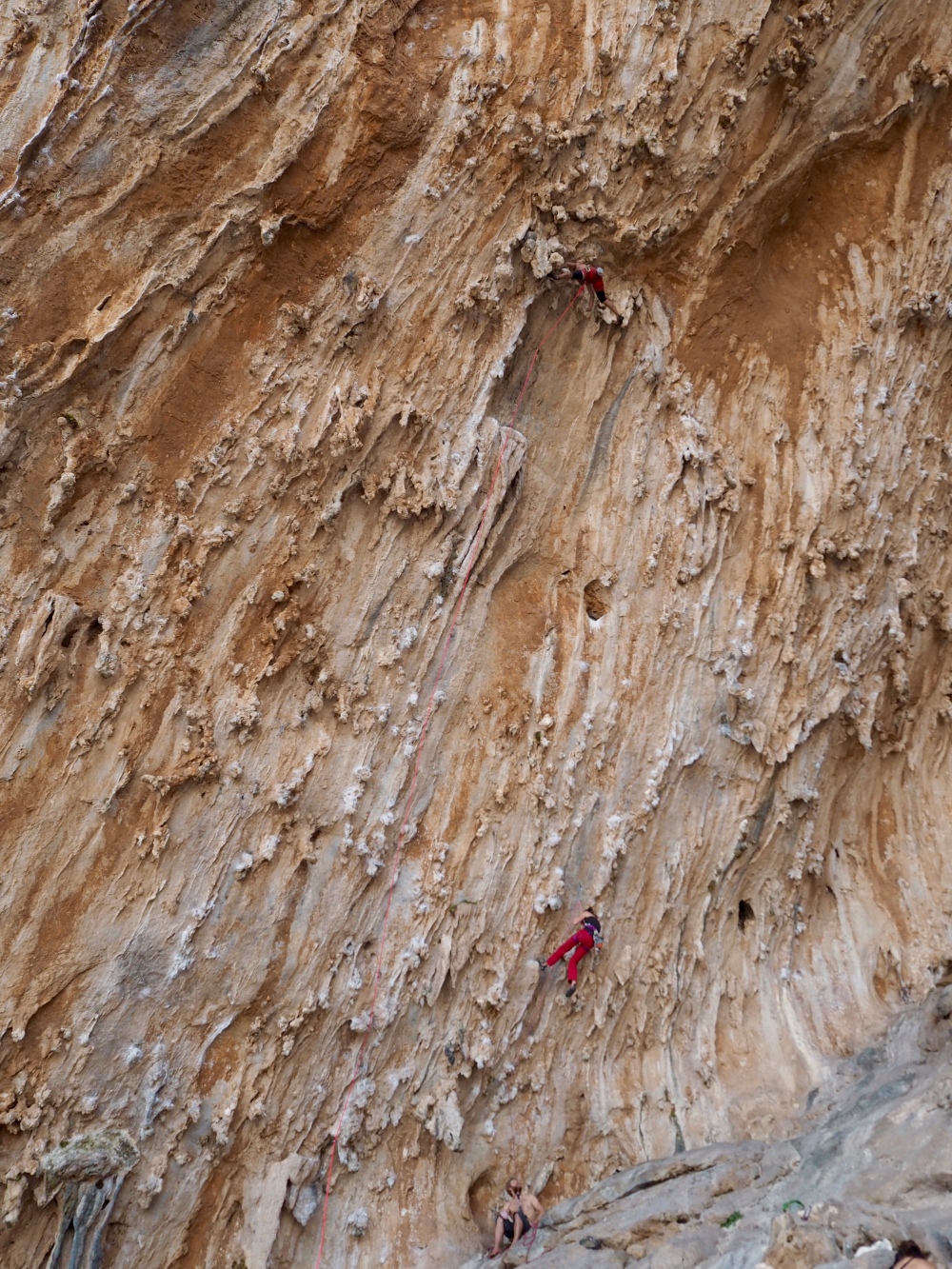 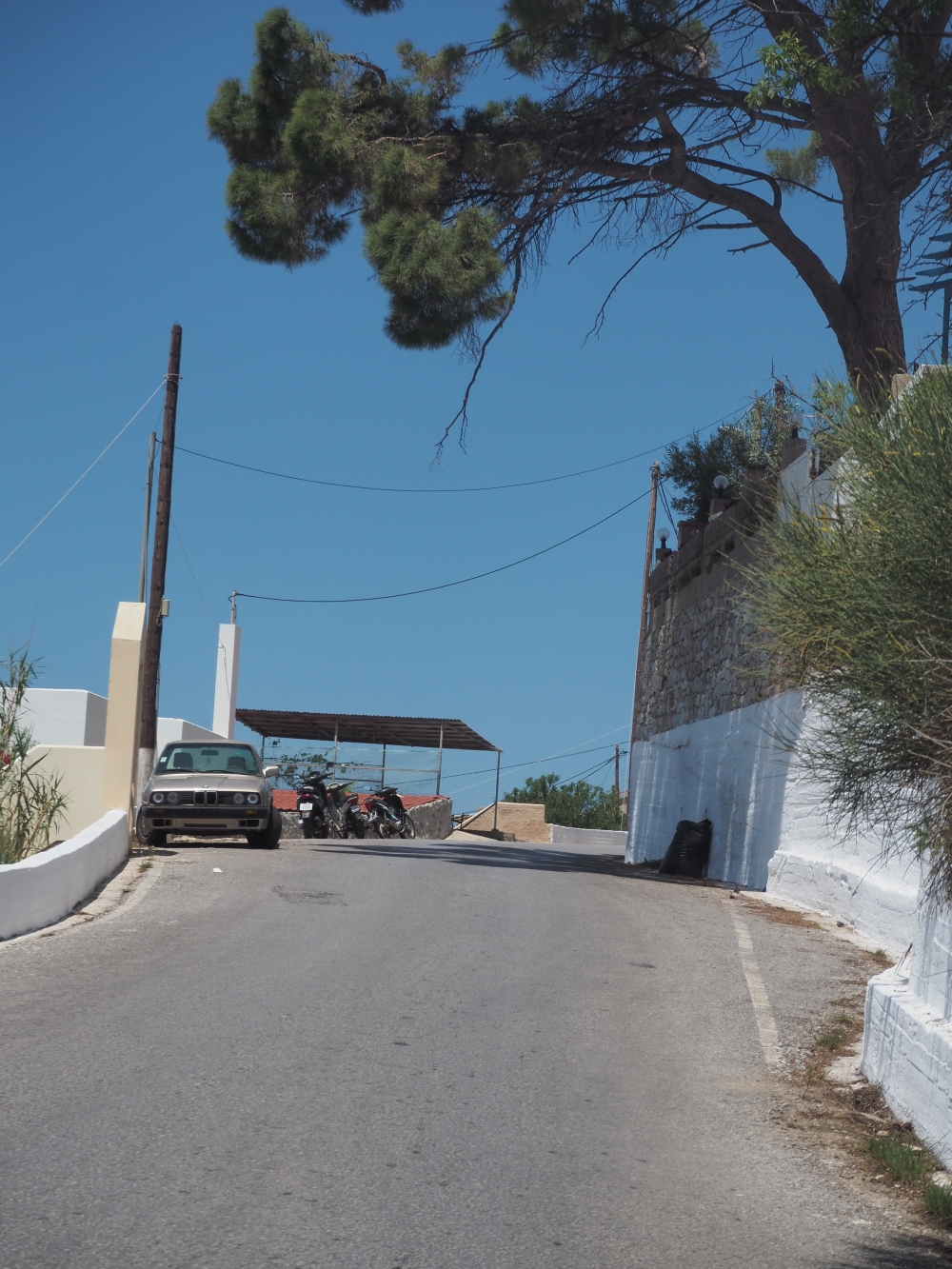 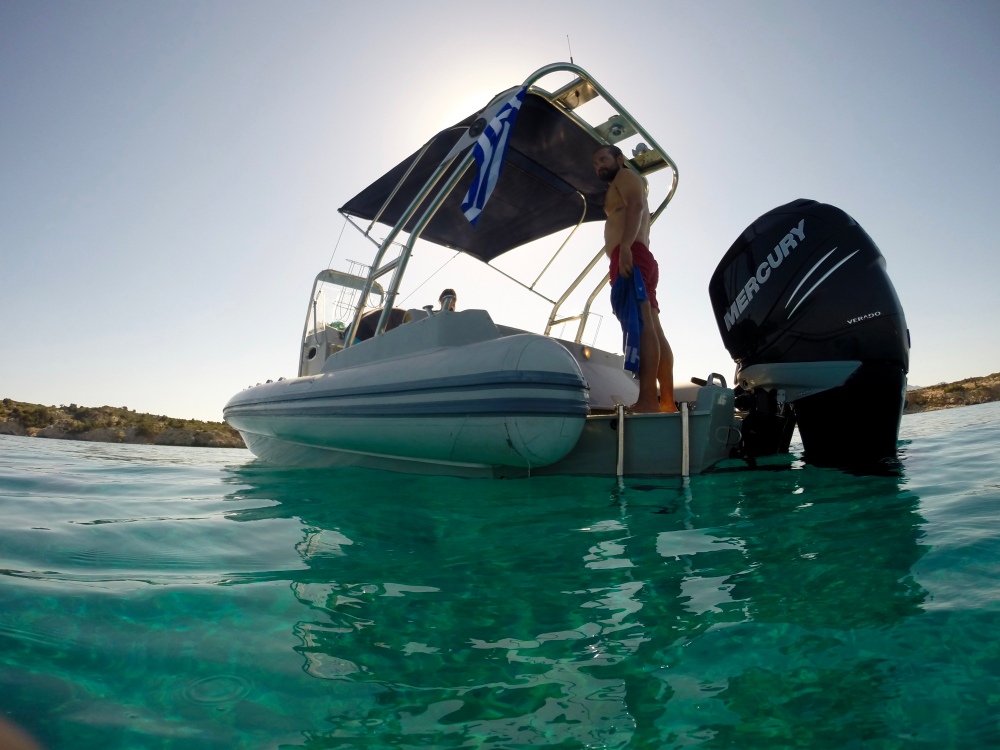 Chilling with Dimitri and friends on the speed boat (for rent here) on a rest day. 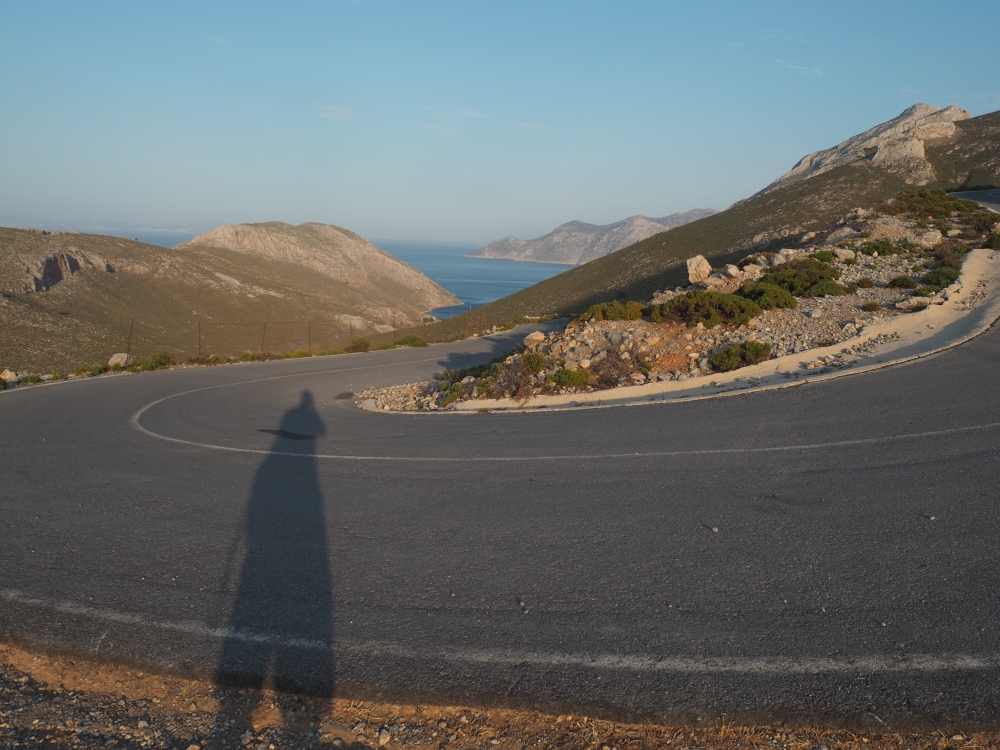 Kalymnos’ winding roads are best travelled on with scooters. The stereotypical Kalymnos climbers ride scooters in pairs of two with their climbing helmets on. 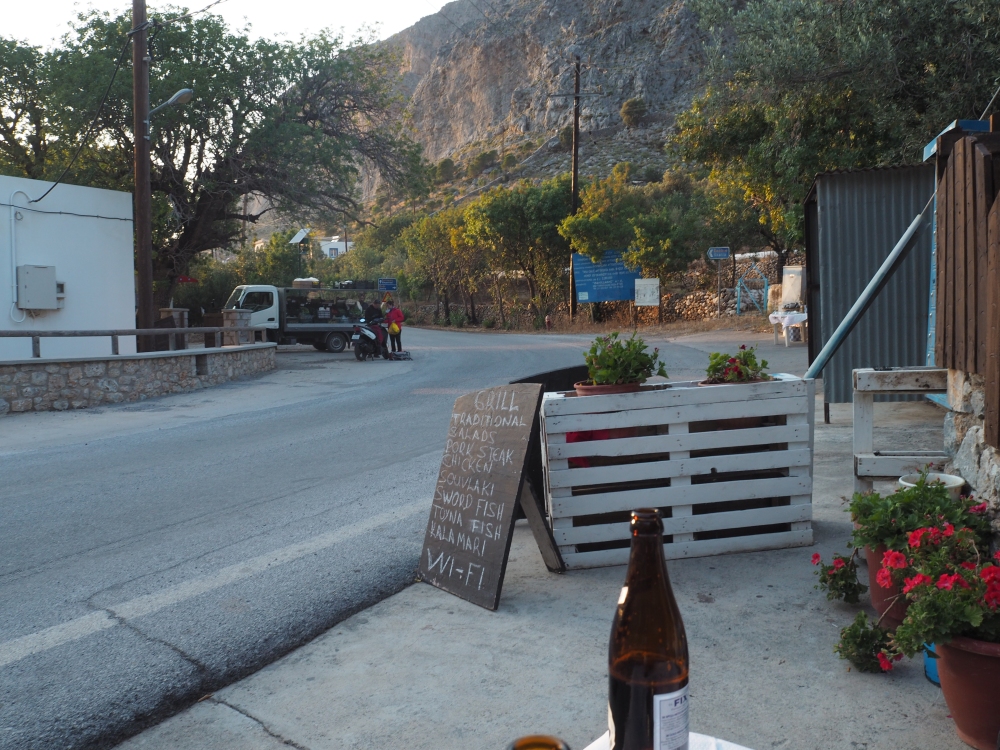 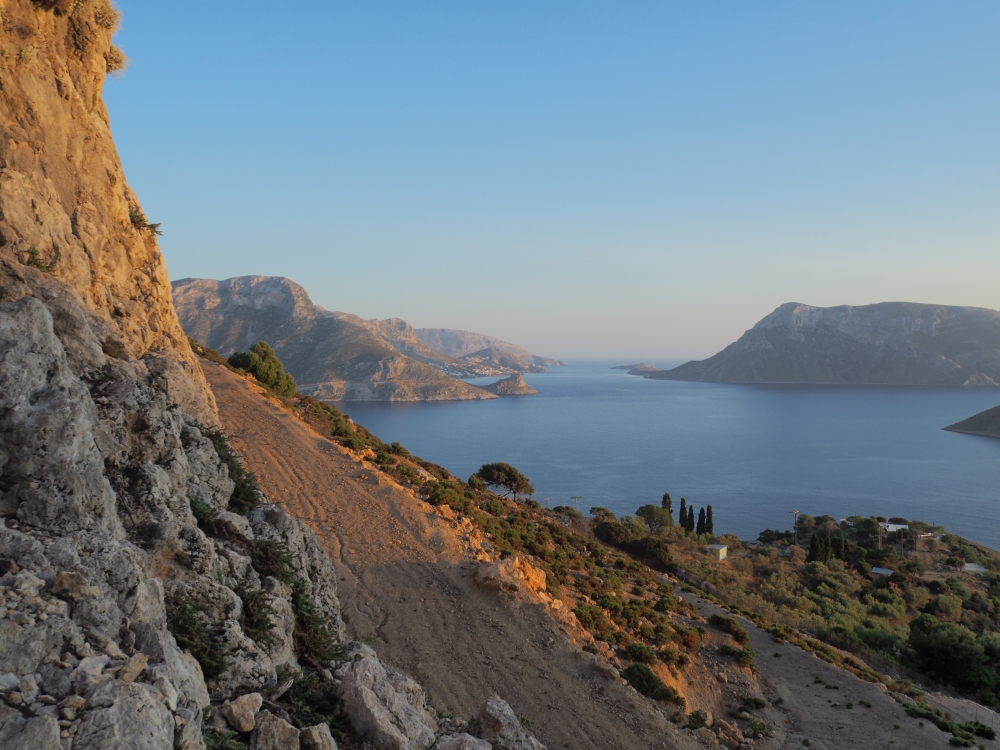 Evening glow. There never is a lack of stunning views on Kalymnos.

‚Grace under pressure’ is an expression I had first come across in Alan C. Weisbecker’s ‚In Search for Captain Zero‘, referring to the mental condition necessary to surf big and fast waves with style. Graceful climbers are those who move efficiently. You only can move efficiently if you are able to dissociate yourself from the risk of falling and open your eyes and mind to the many subtle possibilities to move offered by a rock face. While I find the term applicable to many situations in most sports and a multitude of social life ranging from work to private, I find that rock-climbing by its essence produces with the utmost consistence situations that require us to act at the edge of our capability in the face of threatening consequences in a calm yet alert way.

‘Death is our “advisor” … it reminds us that every action matters, and thus directs our actions toward what’s really important, valuable, and purposeful in our lives. Death reminds us that we have no time to waste.’ – Arno Ilgner, “The Rock Warrior’s Way”.