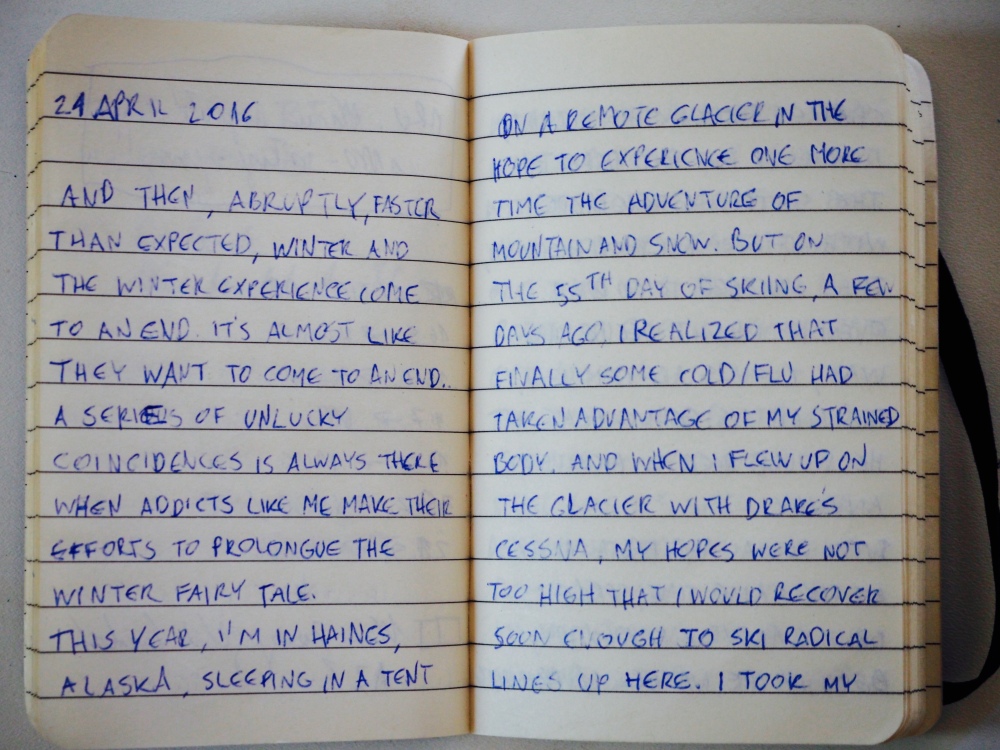 And then, my first ever black bear 100km north of Terrace signaled the beginning of spring in British Columbia in an unambiguous fashion. Yet this long-awaited encounter did a great deal of reconciling me with the end of this remarkable winter:

It’s a good thing the peak season for Alaska backcountry skiing is towards the end of winter. You don’t come to Alaska for practice or play. You want to come here on top of your game, thoroughly fit and with a good amount of (demanding) skiing already under your belt for the season. The reasons: The mountains are steep and the weather is shitty. So shitty that you will not be able to get out for many days… but when it opens up, you need to go from zero to hero in nothing because you will ski the gnarliest lines of your season. That being said, the mountains here are damn beautiful, too.

The most beautiful and most desired features of Alaskan mountains are the so-called ‘spines’ (sometimes also referred to as ‘curtains’). A spine is a convex structure, similar to an A-frame roof of a house. Only, the roof would be very long and would have to be lifted at one end so that the ridge of the roof has an angle of 45 degrees or more along its length. And now what you want to do is ski along the ridge of the roof by changing from one side to the other as you turn. Soon we would start hunting these structures throughout the Southern part of the 49th state. Unfortunately, we were not granted full redemption of our ambition.

Thomson Pass, just 35 miles inland from legendary small harbour town Valdez, is the stuff that Alaskan dreams are made of. Many of the classic lines you know from ski movies are in this area. Many of them are accessible right from the highway for ski mountaineers, although using a motor sled would provide a great advantage. And so over time, we managed to slay some of the most emblematic lines on Thompson Pass one after the other: Girls Mountain, Berlin Wall, Python, The Books, Mount Dimond.

One last breath on top of Python. 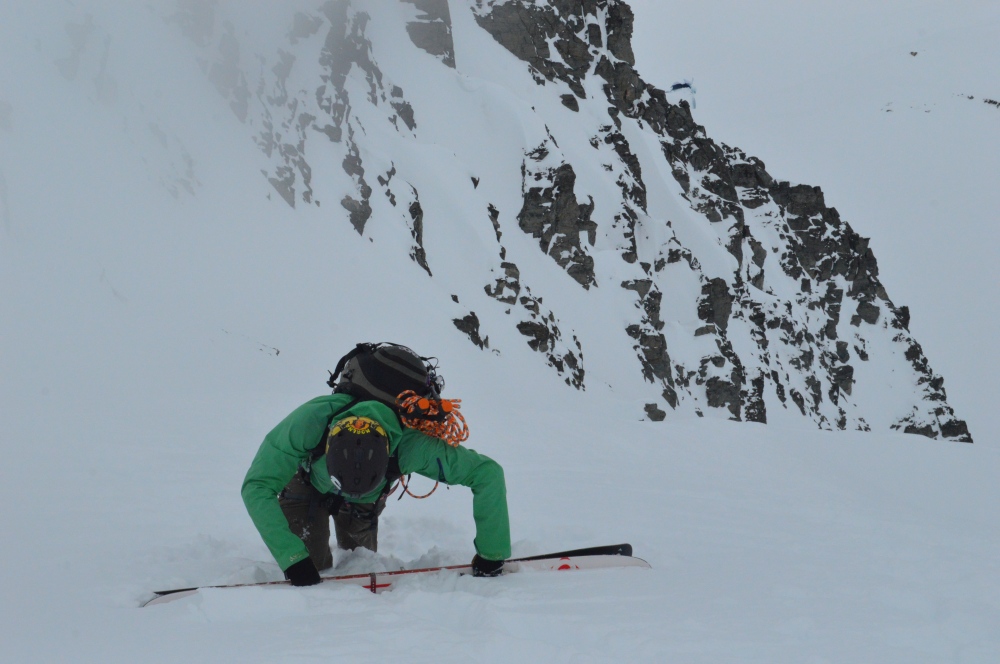 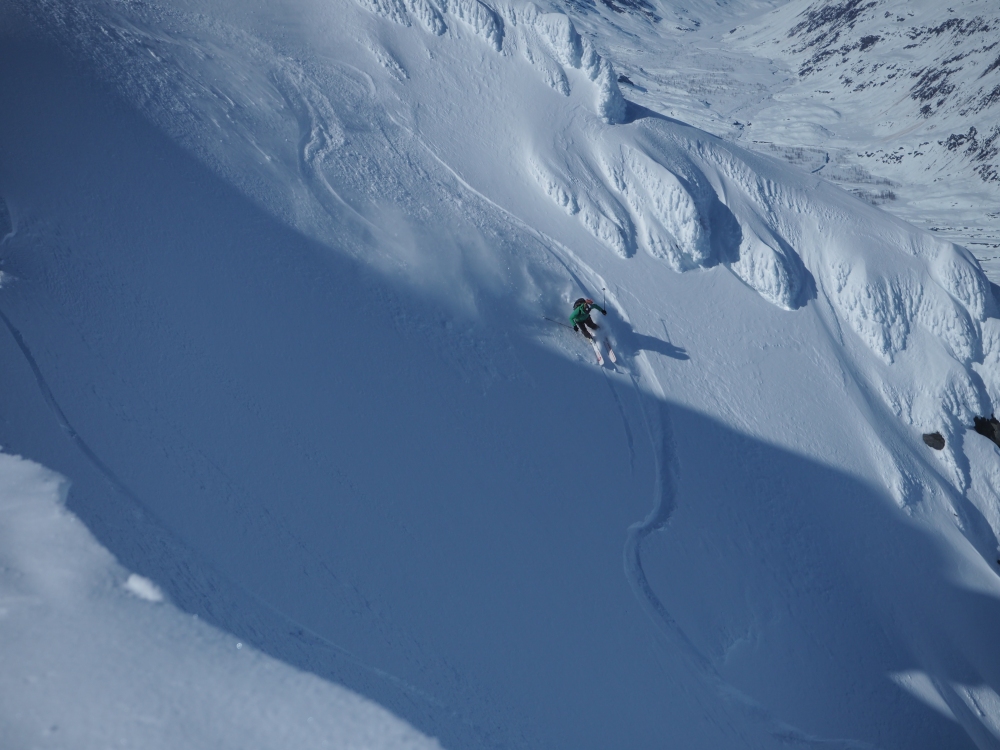 Hammering Berlin Wall with a German.

Balancing on the Wall for another ride.

On the way to German reunion! 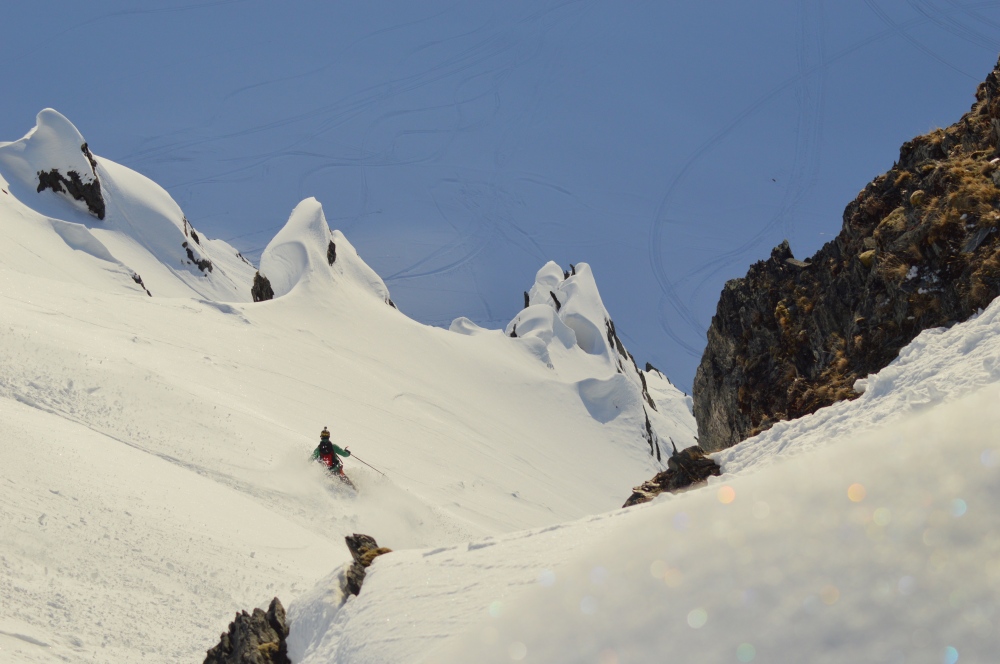 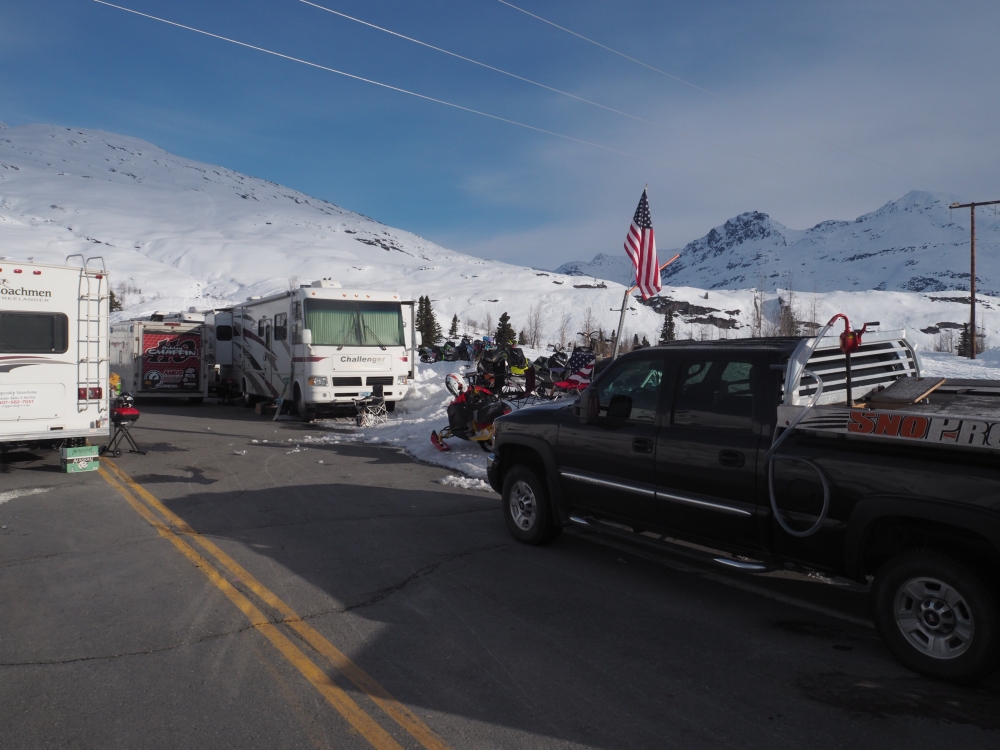 Tailgate crazyness. Hundreds of snowmobilers and skiers gather on Thompson Pass every April. Some are both. Usually you can tell by a person’s skinniness how they usually get up the mountain…

We developed our own little obsessions over time. The first one, belonging to the Thompson Pass area near Valdez, was called THE BOOKS. It is a beautiful mountain ridge surrounding a glacier, perfectly observable from the highway up to Thompson Pass, but yet so remote without motor power. We tried to hire a plane, snowmobiles and even inquired about a heli dropoff to that (at least for us) mystified area. Between the weather and the pilots, riders and prices, none of it worked out. So we decided to do it on our own, just on leg power. Only on the second tentative did we actually make it there. It ended up being the longest day I’ve ever spent on skis with 14 hours, possible only due to the long Alaskan daylight period.

To get the books, we had to take off our boots and cross a river barefoot as the ice had receded too much and some of our bridges built the day before had collapsed.

Daniel bows down as we approach our holy grail. (OK, maybe he was just putting his splitboard back together for the next descent…)

Postcard time! The team at the entry to the valley of the “Books”.

Bottomless beauty. 101 colouirs can be found by the dedicated – and skilled – skier. 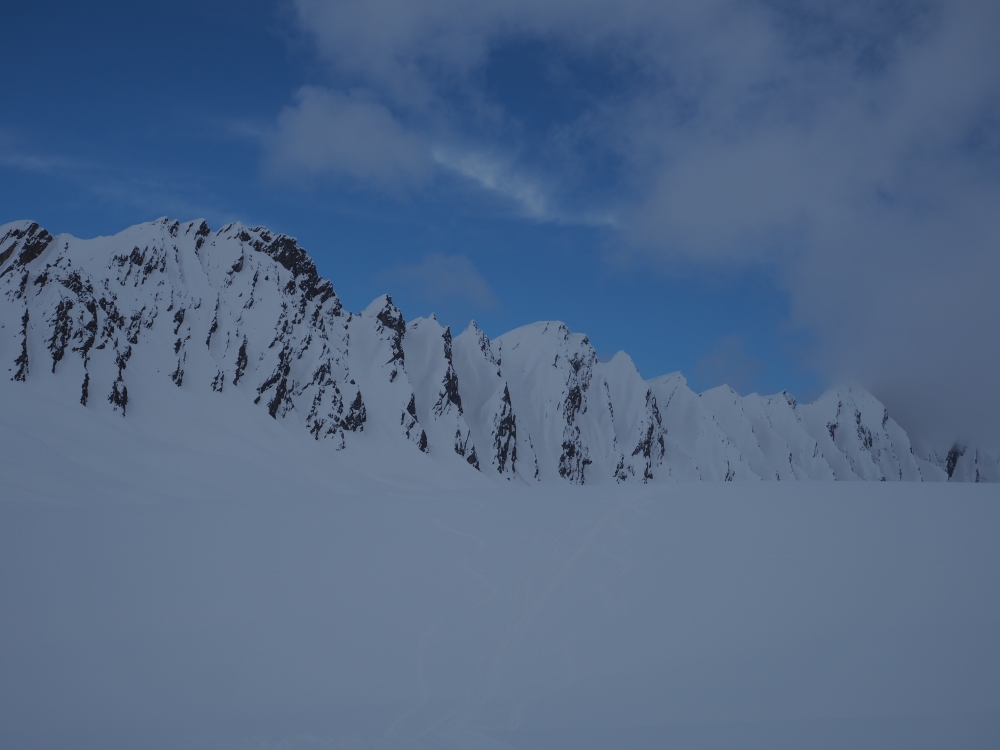 The Books decide to grimly greet us farewell after we already had packed up due to wind and snowfall setting in.

Here’s a little time lapse video from our day in the books:

‘Government Peak’, the sexiest spiny stuff we saw at Hatcher.

And boy did we hike a lot to get there.

About to drop into ‘Mermaid’.

Haines is hailed as the mecca of freeriding. It is also the most demanding place I have seen. You practically need airborne support to get into the mountains to start with. And if you do not heli-ski, then you will have to deal with mean glaciers full of crevasses and seracs.

In hope of riding a face called ‘Sexy Spines’, we found a satellite phone and suitable camping gear to rent and hired the famous Drake to fly us on a nearby glacier. Unfortunately, I was sick and didn’t get better while up there. Daniel tried his luck alone but crevasses, ice fall and et avalanches forced him to retreat as well.

Haines remains unfulfilled project. I will have to return to get things done here.

Flying from Haines with Drake, as have many much better and more famous riders like Jeremy Jones and their film crews done before us.

It’s a big country out there.

Camping on the glacier, tens of miles away from the next human soul. 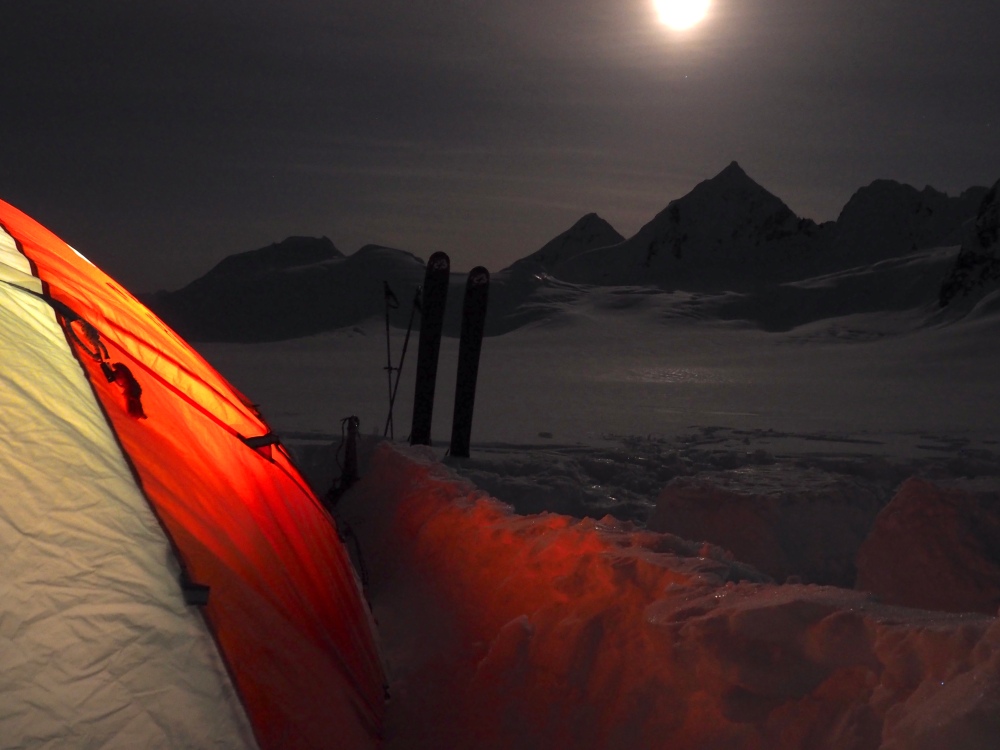 Except for (occasionally snoring) Daniel, that is.

The smartest smart phone I have used. (I know, it doesn’t look like it.)